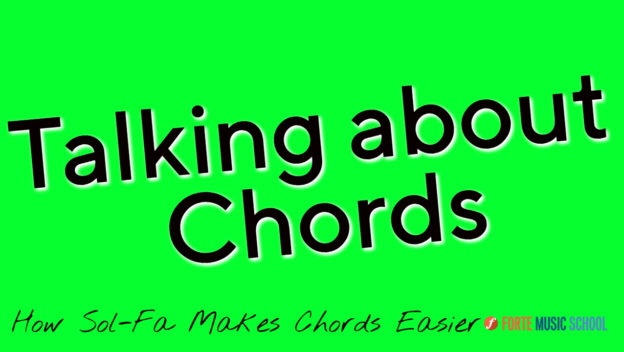 Many Singers learn by ear, and don't have a second instrument. It's easy to learn about Chords when you think of it in Solfa.

This wee chat is all about singing to understand chords!

A lot of singers get soooo confused about chords, particularly if voice is the only instrument you have studied.

Here, we relate it to Solfa, which is a tool that many singers are familiar with, even if they haven't used it much.

When you are trying to work out chords, it is so much easier to start with the major chord and work from there.

Don't bother trying to memorise a huge list of chords, who can be bothered with that...?

If there is a way in which we can simplify what we are doing without compromising the outcomes, or possibly improving it, then we should do it!

Stick around until the end of Video to get a Free Worksheet.

I know that even just the thought of chords is enough to break people into a cold sweat.

I should know, I was totally one of those people!

Any time I had a Keyboard Skills exam at uni I would stress myself out soooo much.

To the point I was so stressed I became ill.

First, I had tonsillitis.

Next year, I had the flu.

The year after that, I had chicken pox! (It's pretty dangerous to have chicken pox as an adult, who knew..?)

So four years roll by; I've actually finished all of entire degree

I had to graduate in Feb instead of October. I had a 2:1 in the bag, but it all depended on whether or not I could scrape a pass on this 1st year exam.

How ridiculous is that?

How ridiculous is it that I became that stressed it compromised my health and my sanity.  Oh, and I almost lost my good degree because I wasn't sure I could stay calm enough to sit this little 1st year exam.

Let me be a cautionary tale to you; chords are a bit of a pain in the bum, but please don't get as stressed about them as I did.

I really really want to help, and I don't want anyone to get into the situation I was in, where the stress made me ill.

Please let me know how you get on with this.

Have you ever been so stressed about something, the stress has made you ill?

How can I help you to avoid that feeling?